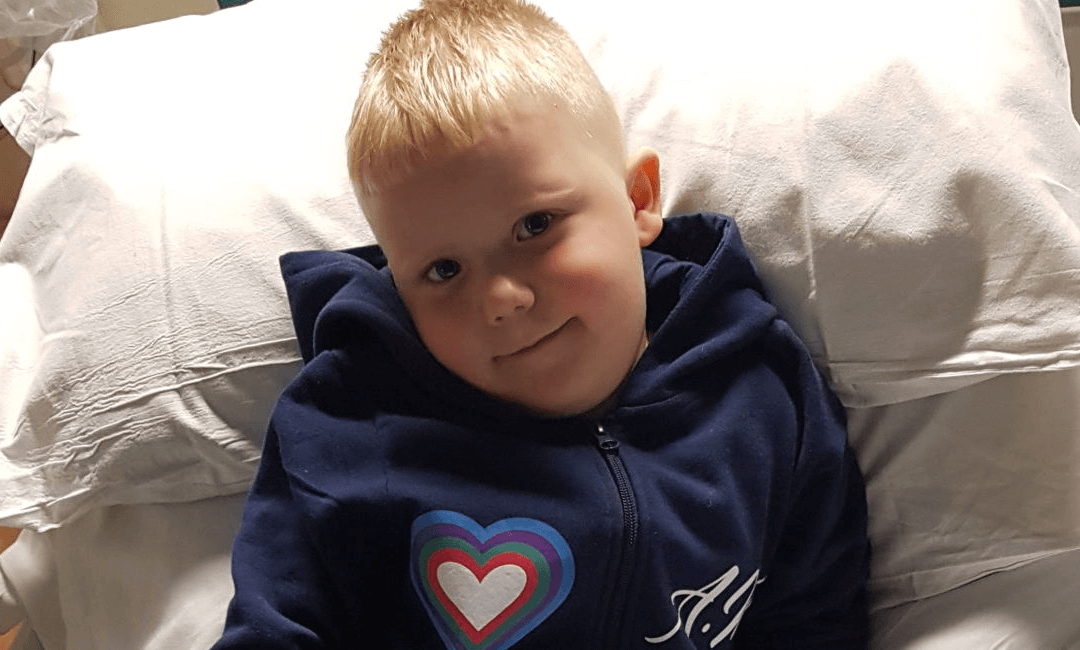 At our 20 week scan in Selby, we heard those words that no parent wants to hear… “there’s something wrong with the baby’s heart”.

We were taken straight to see the consultant and we were referred to Dr Barwick at Leeds General Infirmary. We were told not to Google anything and to patiently wait for the appointment in Leeds. At the scan we were told our baby had a very rare heart condition called Truncus Arteriosus and Ventricular Septal Defect.

This condition affects less than 5 in every 100,000 babies and, as he was likely to be born in heart failure, our baby’s surgery would be within the first six weeks of his life.

On July 28th 2014 Adam Dennis Worker came into the world and was a good healthy 9lb 2oz. All the doctors were very impressed at his size!

After a short stay in hospital we got to go home for ten days but by August 12th he really couldn’t manage anymore. We had already had an appointment at the LGI, so whilst there, we rang the cardiac liaison nurse and she asked us to go up to the heart ward for assessment. Adam tried so hard to feed but he was exhausted. His weight had dropped to 7lb 12oz and he slept about 20hrs a day. There and then we went onto the amazing Ward L51 at LGI for them to take care of us. We met so many wonderful people including the incredible Mr Jaber who was to save Adam’s life.

Adam went to sleep in Daddy’s arms and Mr Jaber spent
7 1/2 hours repairing his broken heart! Afterwards he spent time in PICU, a few issues with his heart rhythm and rate, but once under control we were then straight onto the ward as he was doing so well. We were due to go home but Adam’s wound was open a little so Mr Jaber wanted us to stay over the weekend.

The next day Adam became very poorly, very quickly, and was rushed back to HDU in the middle of the night. Doctors told us that he had developed a dangerous tachycardia and an Atrial Flutter. They took him back to PICU to try cardioversions, where they stop the heart and restart it. This didn’t work first time and he ended up having four of these. This was one of the most terrifying times. After 32 days we finally made it home!!

Having been home only 36 hours, Adam’s colour didn’t look right, he was quite sleepy and was finding breathing a little hard. We took his sister Aimee to school. She was so excited for everyone to meet Adam – he was like a celebrity!

After speaking to cardiac liaison we went straight to A&E and within two hours Adam’s body shut down – he had a full respiratory collapse and was rushed back to PICU on a ventilator. Finally, towards the end of September, we made it home. Many blips along the way, several very fast rides by ambulance with bronchiolitis, croup and respiratory issues.

Adam is now five and had his second open heart surgery with Mr Jaber in March 2019. This surgery went very well, no arrhythmias or complications and five days after surgery we were heading home. We will be forever indebted to Mr Jaber, Dr Wilcoxson, Dr Barwick and all the staff on Ward L51, PICU and of course Children’s Heart Surgery Fund.

There has been a lot of media coverage in recent years about heart units in the UK. A set of 200 standards have been drawn up that every unit needs to reach. One of the largest, most expensive of these standards is to build a ‘hybrid theatre. CHSF’s “Keeping the Beat” campaign launched in May 2016. CHSF provided a large sum of money to make this theatre a reality and it opened in Spring 2019. There are many things that the hospital want and need that just would not be available without the funds so generously raised by CHSF’s supporters.

Whilst Adam was in hospital, we noticed just how much was provided by CHSF. We wanted something to focus on and the chance to give something back, so calling on our friends and family, the first fundraising event we participated in was the Firewalk at Stockeld Park in November 2014. Several of us joined in and raised over £2000 – and there began our fundraising plans!

Around Adam’s first birthday, we came up with the idea of holding a huge party and the ‘Beach Party’ was born. A massive community event – so many people offering support.

We’ve done stalls, bucket collections and a weekend at the Yorkshire Game Fair. When she was at primary school Aimee organised Wear Red Day every year to raise her own money for CHSF. For Lent one year Aimee gave up sugar. She did it! She also learnt a lot about how much sugar is in food! She wanted to raise £50 but ended up about £200 over her target!

We stayed in the parent accommodation at the Brotherton Wing for the whole time Adam was in hospital. We were so grateful to have somewhere that we could all stay and be close to Adam.

Whilst there, Adam’s Dad, Mark, was working for Howdens Kitchens and they offered to provide and fit a brand-new kitchen for the parent accommodation. We could not have been more delighted at their generosity. It is lovely to see how good it looks and how functional it is. There is even a lovely plaque on the wall as well…

CHSF provide help in many ways. They fund vital equipment, provide staff, play equipment and furnishings. They have accommodation for parents, so you are always close to your child, give financial support for families who are long term stay and generally support the staff and families in caring for critically ill children.

If you would like more information about congenital heart defects in babies, children and adults you can visit leedscongenitalhearts.com, funded by CHSF!