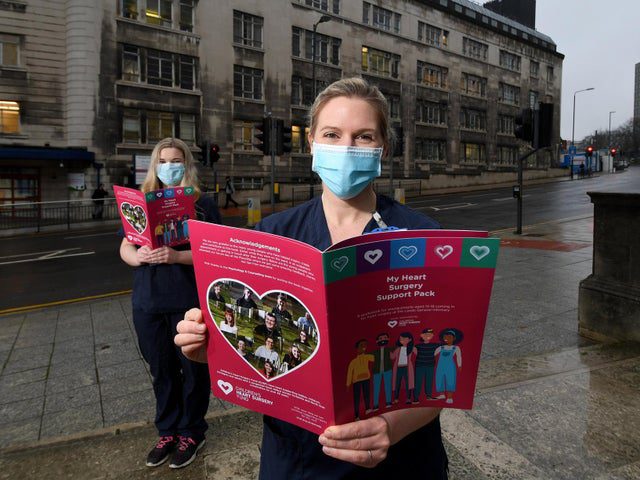 Teenagers and young adults preparing for heart surgery in Leeds now have access to advice from those who have faced the very same journey thanks to a new book produced by Leeds Congenital Heart Unit.

Devised by the psychology team at the unit, which is based at Leeds General Infirmary, and funded by Leeds charity, the Children’s Heart Surgery Fund, it follows on from the success of a previous book, Katie Bear Goes to Hospital, which was published in 2017 but aimed at much younger children.

We’d had some really good feedback to that book and a few parents were requesting something for older children.

But we didn’t want to write it as a hospital team. We felt the experts were the young people who have been through it and had heart surgery before. So we handed it over to them.

An open day was held at the unit for former teenage patients to brainstorm ideas for tips and advice for those facing similar heart surgery journeys.

Topics covered include what to pack, how to keep on top of school work and how to not get bored on the ward.

We’re hoping they’ll feel really proud that they’ve shared their stories and are helping many other people coming into hospital.

There’s a big build up. Often children have surgery when they’re little – toddlers or pre-school – and then don’t need further surgery until they’re teenagers.

What makes it complicated for teenagers and young adults is they are in a really significant stage of their lives; adolescence is tough for so many people.

There’s lots of change, lots of adjustments, applying for school, uni applications, trying to fit in and the thought of coming away from that life and having maybe two weeks in hospital and then six more weeks recovering.

It can be really life-changing for lots of young people.

We knew the more prepared the young person is for heart surgery the better they cope with it. So we wanted to help with that preparation”.

Rachel added: “We’re really proud of the end result. It’s their story, their ideas and they know better than anyone what it’s like to come to hospital for heart surgery.

Thanks to our supporters, we are proud to have funded this excellent book written by the psychology service.

We know how important it is for teenage patients who need heart surgery to be mentally and physically prepared for what will happen before, during and after their treatment in hospital.

This honest and positive resource will help to improve their experiences for many years to come.

Among those who helped contribute ideas for the advice book was Cait Gregory, who had her second open heart surgery at the age of 15 in March this year.

She was born with tetralogy of fallot, a defect which affects normal blood flow around the heart, and had her first surgery at just 14 months old.

Despite initial hopes that she would be in her late teens or early 20s before needing further surgery, doctors were forced to bring this forward due to a leaking heart valve.

Cait took part in the open day before her surgery, helping to provide the viewpoint of someone gearing up to their hospital stay.

Now 16 and nine months post-op, Cait is making a full recovery at home in Sheffield and said having heard the advice first-hand from those who had been through it helped hugely in her preparation for surgery.

It was a life-saver. I got to talk to people about it and hear bits of what was going in the book from the people themselves.

And reading the book since, there’s a lot more that I didn’t know that would have been really helpful.

It was a life-saver. I got to talk to people about it and hear bits of what was going in the book from the people themselves.

One key issue for her was missing school which she says the books urges people not to stress too much about.

I took it very hard, having time off school and trying to catch up. Luckily I didn’t have to sit my GCSEs this year because of corona but knowing that if I did, I have something to fall back on and have reasons and just being reassured by that.

Cait said as soon as she heard she needed more surgery, her “anxiety shot up” so any help to tackle those mental preparations is crucial.

Being physically well is obviously important, so you can have the surgery in the first place but so is being mentally well and making sure that you’re in the right head space, because if you go in there terrified then nothing is going to happen.

It’s easier to get it done with and make sure you can do it.

And hearing from peers is the best reassurance, she says.

Every story is different but just knowing what other people have been through, even if it’s worse or easier, everyone is feeling the same way.

I would hope that people who are in my situation going into surgery would feel a lot more easy about the whole situation and know that there are other people that have been through it or are going through it.

The book is really helpful and just shows that everyone is feeling the same way.

This website uses cookies to improve your experience while you navigate through the website. Out of these cookies, the cookies that are categorized as necessary are stored on your browser as they are essential for the working of basic functionalities of the website. We also use third-party cookies that help us analyze and understand how you use this website. These cookies will be stored in your browser only with your consent. You also have the option to opt-out of these cookies. But opting out of some of these cookies may have an effect on your browsing experience.
Necessary Always Enabled
Necessary cookies are absolutely essential for the website to function properly. This category only includes cookies that ensures basic functionalities and security features of the website. These cookies do not store any personal information.
Non-necessary
Any cookies that may not be particularly necessary for the website to function and is used specifically to collect user personal data via analytics, ads, other embedded contents are termed as non-necessary cookies. It is mandatory to procure user consent prior to running these cookies on your website.
SAVE & ACCEPT