James was diagnosed with Tetralogy of Fallot at our 20 week scan.

At 4 days old James was ready to have his tiny heart stented and he did not have a name. So before he went for his procedure we named him James. Dr Jamie Bentham did his procedure and said we couldn’t have chosen a better name.

James grew well and outgrew his stent so we were scheduled in to replace it for a bigger one. I kissed James goodbye as he went off to sleep.

Two hours later and James had still not come out of the lab so I started to ask if there was anything wrong. Mothers instinct, it was!

Whilst in recovery James started to de-sat very quickly and quick ultrasound showed that the stent was no longer in his PDA meaning no longer any open valve to allow blood to flow.

He was rushed into emergency theatre to repair his heart to keep him alive.

Many hours later we were told James was out of surgery and the amazing Stefano Congui had not only managed to repair James’ heart but had not had to use a conduit to do so.

This was the best possible outcome from one of the worse possible situations. Mr Congui is still considered a god to this day by all our family. 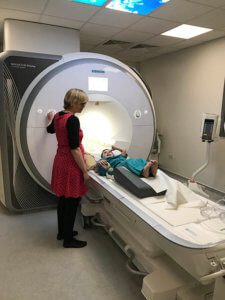 James is now 6 years old and will continue to have MRI’s to monitor his condition. When we were offered the chance for James to trial an MRI while awake, we were more than happy to take part.

Anything that reduces the number of times James has to be put to sleep for procedures and surgery means the world to us, as we all know it doesn’t get any easier when we see them go off to sleep and kiss them goodbye.

James loved the whole MRI awake experience. The playing before hand, watching the movie, me getting to be with him throughout…

Everyone at the LGI has been amazing where James’ care is concerned we cannot thank you all enough!

Find out more about the brilliant toy MRI equipment you helped to fund here.