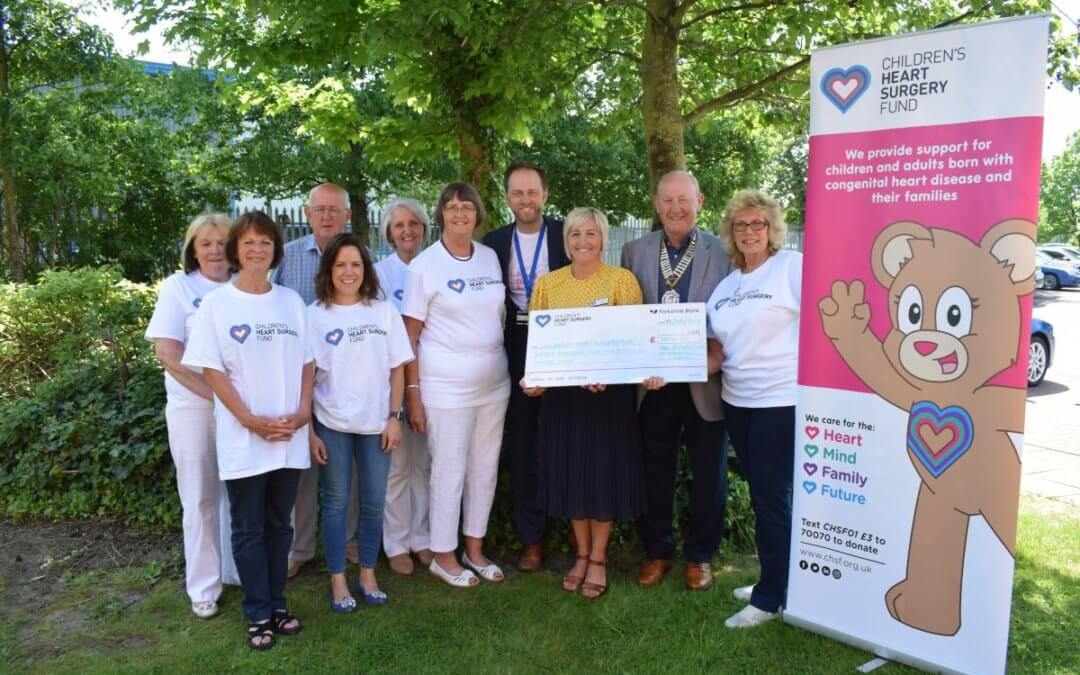 Children’s Heart Surgery Fund (CHSF) are thrilled to announce the target for their Keeping The Beat appeal has been reached – with Wakefield Chantry Rotary Club giving the breakthrough donation of £7,500.

Keeping The Beat is a fundraising campaign, launched in May 2016, to raise £500,000 towards a new children’s heart theatre at Leeds General Infirmary (LGI).

This revolutionary facility will be used to treat babies and children with congenital heart disease (CHD) by delivering both open heart surgery, and heart procedures by cardiac catheter (keyhole surgery).

Wakefield Chantry Rotary Club presented CHSF with the target-breaking cheque on May 15. The moneys were raised by members, partners and friends in response to an appeal by Dick Wood, President of the Club, and his partner Maggie Ablitt, who had made Keeping the Beat one of the main charities for his year in office.

Dick Wood said:
“The Leeds Congenital Heart Unit is such a wonderful facility at the LGI which has actually impacted on me personally. I have had, within my own family, cause to thank the Unit for effectively saving the life of a very young relative. Without their help and expertise, she may otherwise not have survived her illness.
“The whole club and I are over the moon that the target to build the new theatre has been reached, and that Wakefield Chantry were the ones who got them over the line.”

Since the campaign launch in May 2016, countless supporters, individuals, businesses and organisations have fundraised for the appeal which will go towards vital theatre equipment.

Many of the donations have been honoured by way of a fundraising tree displayed outside Ward 51 – the children’s cardiac ward at LGI.

Sharon Coyle, CEO of CHSF said:
“We’d like to say a huge thank you to Wakefield Chantry Rotary Club, and everyone who has contributed to the Keeping The Beat appeal since May 2016.
“We’re on cloud nine to have reached this target within two years, and once again our supporters throughout the region have shown their dedication, generosity and passion in reaching this significant milestone.”
“The new theatre will significantly improve outcomes for present and future generations of CHD patients in our region.”

It is also of critical importance to the integrity of the hospital as a whole, which needs to fulfil clinical standards set by NHS England.

“The new hybrid operating theatre will allow surgeons and catheter specialists to work together during operations, which will be of benefit particularly for complex and for high risk patients.
“We are thrilled to see the hybrid theatre being built now, and are extremely grateful to the CHSF and to all those amazing donors who are making this possible.”

The term ‘hybrid’ theatre describes an environment where cardiologists and surgeons can work together for the sake of the sickest of children with multiple complex needs.

It brings together the latest medical imaging techniques and the more traditional operating theatre environment to give patients the best possible treatment using state-of-the-art equipment.

Building work on the theatre has been ongoing since January, with additional funding coming from Leeds Teaching Hospitals Charitable Foundation, and it is due to open in February 2019.
CHSF have already pledged £1.25 million towards the Keeping the Beat project, and the charity are celebrating their 30th anniversary this year.