Robynn was born prematurely on November 8, 2018 at 33 weeks – 6 weeks before schedule and was rushed to ICU (Intensive Care Unit) at Jessops Hospital in Sheffield. She was put on breathing monitors and antibiotics as mum Dee had contracted sepsis.

Robyn was a good weight at 5lbs and 5ounces and was doing really well. A few days in, she had a heart scan that confirmed she had two holes in her heart and one of her tubes was tightening so would need open heart surgery before reaching 6 months old.

Robynn had a few issues with feeding due to her heart condition. Mummy and daddy agreed she would be tube fed at home and had all the training so she could be home for Christmas.

But the morning she was due to come home, she became really unwell and was rushed back into intensive care. She deteriorated – not keeping any milk down and not gaining weight. The doctors decided to change her milk to dairy free which helped the situation a little, but Robynn was still very unwell.

The tests came back and she was diagnosed with neophobia and bronchiolitis. She spent 19 days in the intensive care unit in an incubator not able to have cuddles with her family.

She finally come through the worst, returned to the high dependency unit and could come back out for cuddles. But Robynn’s breathing never recovered from this and her heart seemed to be getting worse.

The doctors told her mummy and daddy that her heart was failing and that she would need open heart surgery right away.  This was devastating news as they wanted her bigger and stronger first – but it had to be done. 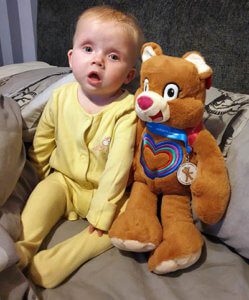 Robynn was transferred to Leeds immediately and went for open heart surgery on February 11 2019. The operation lasted 5 hours where they repaired the two holes and opened her vessel wider.

It was successful and she was back in the intensive care unit, where she recovered extremely quickly. She was back on a ward in 24 hours smiling away at everyone!

In the midst of all this, Robynn’s parents were told that they she was being tested for a rare condition called DiGeorge Syndrome (22q11  deletion). And it came back positive.

This is a rare condition that can affect children in lots of different ways – no child is the same with 22q syndrome – but often includes congenital heart disease. More information at www.nhs.uk/conditions/digeorge-syndrome/.

Robynn spent 4 more days after in hospital after her operation, and then got to go home on February 16, 2019 with her 2 sisters and mummy and daddy after 4 long months!

We have been home for 3 months at the time of writing and Robynn is thriving. She is still tube-feeding, but keeping her milk down now and gaining weight lovely!